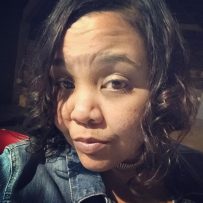 Aleta graduated from Edinboro University with a bachelor’s degree in Sociology. With the support of her brother who lives and worked in Pittsburgh for 5 plus years and her best friends, Aleta made the decision to try something new and packed up to move to Pittsburgh. Prior to becoming the Adult Advocate with NAMI Keystone Pa, Aleta was a service coordinator working with people who were experiencing homelessness, living with a mental health diagnosis, and D&A issues. Aleta would connect and support clients with housing, mental, physical health, and D&A treatment. Aleta would also connect clients to resources in the community and assist with community services such as food banks. Aleta also worked in a woman’s shelter as a service coordinator assisting woman who were released from jail or halfway housing experiencing homelessness. The Step-Up program gave the women a chance to get back on their feet, find employment and housing. Aleta’s role as an Adult Mental Health Advocate has several components. She attends the ACSP (Acute Community Support Planning) meetings as an advocate to the consumer going through the process. This process allows the consumer to have a voice and be involved in their own treatment plan once discharged from the inpatient unit of the hospital. Aleta also assists consumers with understanding the importance of having and completing a MHAD (Mental Health Advance Directive). MHAD allows the person to outline the preferences in their mental health treatment, such as who is involved and what works best for them. Aleta also provides agency trainings on MHAD with the same objectives, so staff can assist their consumers with completing the forms. Aleta’s in office time consist of helping with incoming calls and obtaining resources for people seeking services either for themselves or a loved one.

The most rewarding aspect of my position is being able to coach people to take a front seat in their mental health treatment whether at the ACSP meetings or assisting with a MHAD. Being a support for someone going through a scary time in their life gives an extra layer of comfort and helps them form confidence in their recovery. Aleta has stepped into her new role as a co-chair for both Public Awareness and Education committees; ACCR warmly welcomes you!